ERDservices is pleased to announce its ranking of the fastest-growing ER&D service vendors in CY 2017. Note that this ranking is based on reported numbers (and not on CC or CC/CS numbers). More about the methodology below the chart.

HCL Tech Had a Superb Performance in 2017

The big surprise of the year was the performance of HCL Technologies, which has had a stop and go strategy in the past three to four years, with strong growth initially led by four large deals, and then several quarters of plateau-ing. Since early 2017, HCL is in a high growth mode for three reasons:

Then Akka and Infosys had similar growth, in the range of 18%-19%. Dynamics are different, with Akka deploying its model of acquisitions and organic growth. Infosys had a purely organic performance this year. Finally, with a 17% revenue growth, ATG is benefiting from its positioning currently centered around the European aerospace and automotive industries. 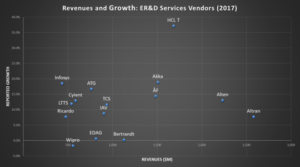 Let’s speculate on how 2018 will look like next year, based on what we know already:

These are the facts. Let’s now speculate: 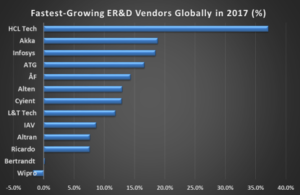 More information about the methodology: we have considered: